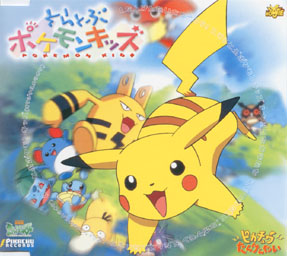 
Soratobu Pokemon Kids is a cute little CD, and has several songs that I like. All the music is pretty happy, and can be fun to listen to. Apparently, it is the soundtrack to the Pikachu short "Tankentai o Tsukuru" that takes place in the second movie.

"Tankentai o Tsukuru" (Rescue Squad Training) is a light and peppy tune that is the intro to the short. It's very "bouncy", with a very steady and fairly quick beat. The Pokemon Kids chant the song throughout, and it's neat. Kinda wish I had an English translation though...

"Soratobu Pokemon Kids" (Soaring Pokemon Kids) is probably my favorite song on this CD. I used to hear it quite often on KCHU, and always wondered what it was. It's kinda short, but the person who sings it has a cool voice and I like the sound of the music. And of course, there's the somewhat strange question: "Which Pokemon Is Best For You?"

"Taiju to Nakamatachi" (The Big Tree and All Its Friends) is a slow and calm song. I've heard it before (when I was missing it, I didn't think I had), though I can't put my finger on where since I haven't seem the movie yet v.v

"Mama no Daijina Pokemon" (Mama's Favorite Pokemon) runs a very second to Soratobu in terms of the songs I like on the CD (it might beat it if I'm not in quite so happy a mood). It's a bit less happy and peppy compared to the rest, and it definatly sounds like it came from one of the movies (which, it did :D). This is another song that I desperatly wish I had an English translation for since I think it's really pretty.