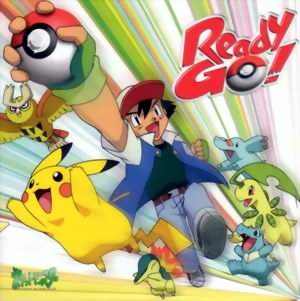 
Ready Go! is a great album IMO. I like all the songs, all the songs are nice and upbeat, and there are karaoke versions of all the tracks (w00t!) :D

UPDATE! While doing more scrounging of the net to find the songs I was missing, I discovered that what I was previously calling "Aratanaru Chikai" was actually the Acoustic verion. I should now have all versions of Aratanaru Chikai correctly labeled.

"Ready Go!" is the opening theme to Season 5. This track is a lot different than your standard Pocket Monsters stuff, with it's heavy bass beat and technoish background. This isn't to say that its bad (far from it!), since the elements work very well together and create a song that I was hooked on the first time I heard it.

"Pokettaari Monsutaari" (???) is the ending theme to Season 5. Unlike the first track, this song is done in a much more country style with fiddles throughout. Its my least favorite track on this CD, but that's among other tracks I really love. I think this track takes a bit of getting used to, but isn't too bad :)

"Aratanaru Chikai (Acoustic Version)" (Renewed Oath (Acoustic Version)) Is the acoustic version of the following track (yet taking quite a few liberties in modifying it). This song is the opening to the television special "Pocket Monsters Crystal: Raikou, Ikazuchi no Densetsu". I really describe the track other than that I think it's stunning X.X

"Aratanaru Chikai" (Renewed Oath) is a peppy, upbeat song that I absolutely love the opening few seconds of. The rest of the track is pretty good, but the bacground to it and those first few seconds I just can't get enough of =D This is the ending theme for the Raikou television special.