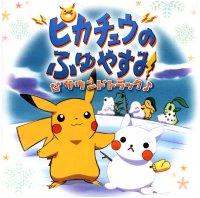 
Pikachu no Fuyuyasumi Soundtrack is (obviously =D) the soundtrack to the short "Pikachu no Fuyuyasumi". I just managed to get my hands on this album fairly recently, so I'm not exacly set in my view of it. My first impression would have to be that it's an OK CD with some tracks that I like better than others. Overall, it's nothing stellar, but it isn't really bad either. Perhaps after a while of listening to it I'll be able to get some descent opinions on the songs that I'm indifferent to.

"White Dance" (White Dance) isn't exactly the kind of song that I would normally enjoy, yet for some reason I definatly like this song. The closest genere I could describe it as would be some kind of chant, or if you really stretched it perhaps rap. Something about it is fun to listen to, though I can see how it might not be liked by everyone sicne I was a bit supprised that I liked it myself!

"Mousugu Santa ga Yattekuru" (???) is one of the songs that I'm a bit indifferent to on this album. I don't dislike it, though I don't exactly get an overwhelming feeling of happiness when listening either ;). The style is again hard to describe, though it's trivial to find the Christmas overtones that it has.

"Asobizumu Sengen" (???) is even closer to being rap than the first track is (even if I still wouldn't exactly call it rap). I'll say up front that I'm not a fan of rap at all, so this song isn't one that I really like. The style is certianly interesting, the singers not bad, but there's just something nagging at me that causes me to not like it (it's similarity to rap). I'm probably fairly alone in this opinion though, so it's probably better than I personally feel toward it.

"Christmas Eve" (Christmas Eve) again a song I feel fairly close to indifferent to. I like it more than I don't, but it dosen't stand out as a song I think I'll be listening to a whole lot... I think I'd like a karaoke version of this track better, since I think that the music behind the singing is the reason I kind of like it.

"Fuyuyasumi Fan Club" (Winter Vaction Fan Club) is the Winter counterpart to "Natsuyasumi Fan Club" (Summer Vacation Fan Club). It keeps the same general style as Natsuyasumi, and when I first tried singing along, I kept accidently sining from Natsuyasumi instead since they're so very close. I don't enjoy it quite as much as Natsuyasumi, but it isn't a bad song either. The worst part IMHO of the song is when the dads begin to sing (simiarly to how the moms sing in Natsuyasumi). Their singing is a bit funny to hear, since it dosen't seem to fit the style of the song at all =D. It's not bad per se, but it's not what you'd expect.

"Karafuri Fuyuyasumi" (???) is (again =D) a song that I'm indifferent to. It's annoying in some respects, though in others it's cute. Overall, I tink that I'd like a karaoke version better like with Christmas Eve. That, or a song sung totaly by the guy, since he's got an interesting contrast with the upbeat background going on.